Fellow Seattle-based entrepreneur/venture capitalist, Nick Hanauer, has been been poking the hornets nest of 1%ers recently with a Bloomberg Op-Ed he authored which argues that we capitalists are not job creators, our customers are.  If Nick had singled out high-finance types, well, okay, those guys are everyone’s somewhat-deserved favorite target.  But Nick couldn’t be talking about me, a founder a several companies including Expedia and Zillow, that now employ thousands of people, could he? END_OF_DOCUMENT_TOKEN_TO_BE_REPLACED 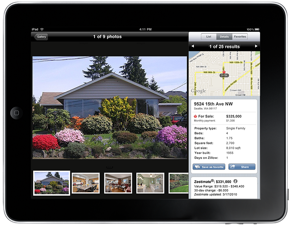 At Zillow we just released a completely re-conceived Zillow on iPad.  It was fantastic fun to develop and even more fun to use. Here is my launch post about it on Zillow’s blog and below is a video for those of you who don’t yet have an iPad. END_OF_DOCUMENT_TOKEN_TO_BE_REPLACED

“Should we call our site something literal or should we make up a new word?” This is a question I often get asked by consumer product/service entrepreneurs.  In light of Microsoft’s re-launch of Microsoft MSN Live Search as “Bing”, I thought it timely to re-fresh some old thoughts I’ve had about naming, words, and branding. END_OF_DOCUMENT_TOKEN_TO_BE_REPLACED