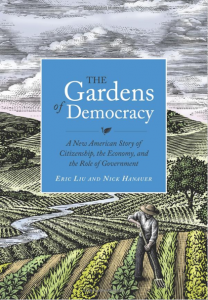 Fellow Seattle-based entrepreneur/venture capitalist, Nick Hanauer, has been been poking the hornets nest of 1%ers recently with a Bloomberg Op-Ed he authored which argues that we capitalists are not job creators, our customers are.  If Nick had singled out high-finance types, well, okay, those guys are everyone’s somewhat-deserved favorite target.  But Nick couldn’t be talking about me, a founder a several companies including Expedia and Zillow, that now employ thousands of people, could he?

Turns out Nick’s office is 2 floors below mine in the “WaMu” (remember them?) building in Seattle, so I elevatored down and knocked on his door to find out more.  Nick has a commodious, comfortable office, complete with his stress-relieving guitar that he is teaching himself to play guided by instructional videos he finds on YouTube, but when he gets wound up, his office can feel quite small.  [Arms waving, high volume]  “Rich, you do everything you can to avoid having to hire people at Zillow.  Why?  Because it’s good business.  The only reason you hire people is because you have 25 million users and thousands of advertiser customers who demand that you give them attention.  Your customers are responsible for the jobs at Zillow, not you.”  Hmmm

Turns out another reason Nick’s office was feeling crowded was due to the stacks of this cute little book piled up all around called The Gardens of Democracy.  He grabbed one,  immodestly autographed it (he is co-author with Eric Liu), and handed it to me.  “Read this and you’ll understand.”  This book packs a powerful punch and it is perfect stocking stuffer size.  There are simple, logical themes that I might have heard from my grandfather, including:  True self interest is mutual interest;  Society becomes how you behave;  We reap what we sow.  But the theme that resonated most with me, and the one he expanded on for the Bloomberg piece is We’re all better off when we’re all better off.   We cannot have shrinking middle class with declining real income while the top 1% leaps ahead, and expect to have a healthy, sustainable economy (which Nick and Eric liken to a garden rather than a machine.)  Worse, our Zillow Home Value Index, which measures the median Zestimate valuation for all houses in the US has dropped 24% from its peak in 2007, taking what was once the most valuable asset for most Americans and turning into a liability.  Zillow’s Chief Economist recently published a report saying that 28.6% of all homes are now “underwater” (the Zestimate is lower than the outstanding mortgage).

So, it’s pretty easy to agree that we have a problem here.  It’s harder to decide what to do about it.  Nick argues in his Op-Ed and in his book that increasing taxes on the wealthy to the normal levels that we observed for most of the 20th century, putting more money in the hands of the middle class so that they buy goods and services which, in turn, force capitalists to hire more people, further stimulating the economy, and so on, is obvious.  The mortgage interest tax deduction, which heavily favors the wealthy, like so many of the myriad tax deductions and loopholes in our current system, is one place “close to home” that we could start.  I’d happily give up my mortgage deduction if it meant a direct benefit to the millions of homeowners who are panicking underwater right now.  This move would stimulate the real estate market, the root cause of so many of our current ills.  This logic may sound self-serving, given my ownership stake in Zillow, but, of course, that is Nick’s point exactly...  We’re all better off when we’re all better off.